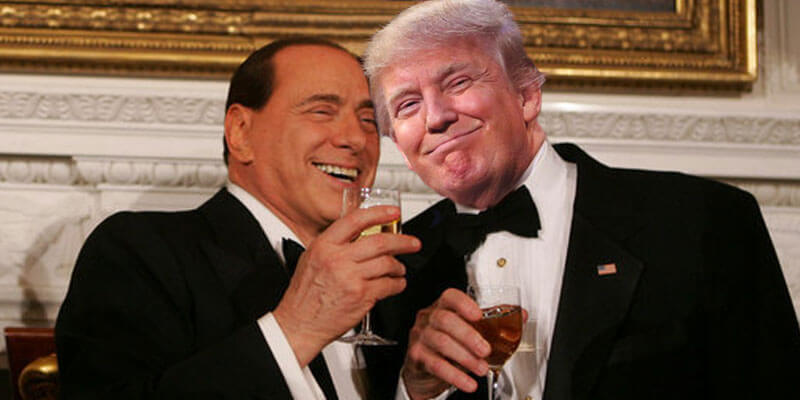 Donald Trump is really the American Berlusconi? Absolutely, according to what is written by some authoritative commentators, mostly, they build their theory arguing with fundamental issues such as the bravado, the vile money  and, unbelievable, “a troubled relationship with their hair.” Even!

So, if it is true that they nourish some adversity for the politically correct, it should also be noted that Berlusconi is not a candidate in the primaries of a party that already exists but that, in a matter of a few weeks, he realized three miracles in one fell swoop: to found a political party that in 1994 elections was ranked first, putting together the coalition (or rather, the coalitions) which won the elections and, therefore, prevented the seizure of power by the post-communist left.

From the point of view of electoral marketing it was a miracle, that saw the former italian Prime Minister a figure capables, for at least fifteen years, to magnetize around him an impressive consensus that made him – net of successes and failures – the protagonist of the political scene. The same cannot be said of Trump’s candidacy, that seems an invasion of the field, extemporaneous and ends in itself. So, if berlusconism exists, in part still stands and in a few years will face the posterity’s judgment (very difficult), about trumpism, jokes and slogans aside, there is no trace.

A great merit, we must admit, of the American candidate, is that he had laid bare the limits of huge patrol of the current aspirants to the nomination of the GOP in the presidential election, which will released the Obabama’s successor. If Scott Walker and Rick Perry have abdicated even before starting Jeb, the third aspirant President of Bush’s, seems to lack “something” that would enable him to reach the heart of the Republican electorate that, just to give an example, disagree his positions “too soft” about illegal immigration.

On the other hand, despite the good performance in the last debate, the former Hewlett Packard CEO Carly Fiorina, rather than the final victory, looks set to fight for the nomination for vice with various Carson, Cruz and Rubio. Yeah, but who’s vice? Many, around Washington, argue that the real race for the Republican nomination will begin only after the eventual departure of Donald Trump, as well as among Democrats, eager that the current Vice President Joe Biden will run blowing away Clinton and Sanders, two candidates that, for different reasons, have not been digested by the leaders of their party.

[Photograph by Mark Seliger for rollingstone.com]

NextCreed, Rocky and the bell that for Stallone has not yet rung
Back to Blog